Climate change has a global impact on the environment and economy. The EU has prepared a new adaptation strategy

The European Union is aware of the ubiquitous impacts of climate change and has therefore prepared a new strategy in recent months to help European countries better achieve climate neutrality and effectively prepare for the coming changes together. Another novelty is the regulation of the European Commission that defines how carbon dioxide emission data will be collected from car on-board computers. Climate change is an increasingly important issue for business and companies from various sectors and even for individuals. For example, a brand’s impact on the environment is crucial for millennials to such an extent that they would change their employer depending on it; and companies are well aware of this fact – on a global scale, up to 30% of them are already experiencing the effects of the climate change on the day-to-day business operation.

Take a look at other topics that we address in our EnviLaw newsletter #5:

If you do not want to miss any important news, subscribe to the EnviLaw newsletter!

The world’s warmest decade in history has just ended. The record of the warmest year was broken eight times. The frequency and severity of climate and weather extremes is increasing and not even stopping all greenhouse gas emissions can prevent the impacts on climate that are occurring now. These are only some of the reasons why a new EU strategy on adaptation to climate change has been developed in recent months.

The EU has committed to climate neutrality by 2050 and to reducing emissions by 55% by 2030. The strategy provides a basis for policy coherence, sets a framework for achieving climate neutrality and commits Member States to continuous progress. In the strategy, the Commission sets several major tasks, and the cooperation of the public and private sectors will be key. Both individuals and entire governments must address the solution. At present, the European Union and global community are not sufficiently prepared for the growing intensity and ubiquity of the climate change effects and the new strategy represents one of the means to combat this unpreparedness.

EU regulation has been gradually pushing for a long time to reduce CO2 emissions from passenger cars. In order to evaluate the efficiency of these efforts, the European Commission must collect real-world fuel consumption data from 2021 onwards. This information is obtained from on-board devices installed in new vehicles. It will be mandatory to disclose this data from 2022. Everyone will thus be able to verify the actual consumption that can be expected from the selected vehicle type.

The new implementing regulation defines detailed methods for transferring data from cars through manufacturers, garages/repair shops to regulatory authorities and the general public. It should also be said that the EU law explicitly includes the option for the vehicle owners to reject the transfer of consumption data.

The economic implications caused by climate change are obvious; however, the transition to a low-carbon future also has its economic consequences.

What is the price we pay for inaction in combating the consequences of climate change? Fires, hurricanes and rising extremes have become commonplace in recent years. In 2020 alone, financial loss caused by natural disasters reached USD 210 billion. This is not only a loss in infrastructure, industry or housing; the economic growth is slowing down as well. Extreme weather changes also affect human health and productivity. Research points to the link between rising temperatures, decline in productivity and increase in population diseases. At the same time, the gap between disadvantaged communities and individuals with fewer opportunities to face the consequences of climate change will increase.

Economic entities do not bear any direct costs of greenhouse gas production and social costs that affect other people. Emissions are thus becoming a negative externality that entities ignore; they overproduce CO2 and other harmful substances and insufficiently invest in research. There are many carbon pricing schemes (taxes, emission allowances) which together cover almost one quarter of the global greenhouse gas production. These schemes force large polluters to innovate and the income from these innovations can be used to offset the negative effects of greenhouse gases. An Oxford University study found that green projects (e.g. the recovery plan proposed by the European Commission) that seek to link climate and economic goals have a considerable potential to increase national wealth and product capital.

The direct and indirect impact of climate change on the financial sector is currently reflected e.g. in the insurance business but a steep rise is also expected in the banking sector.  Central banks are increasingly focusing on the assessment of risks associated with climate change. The financial sector mediates private investments and therefore plays an important role in the transition to a low-carbon future. 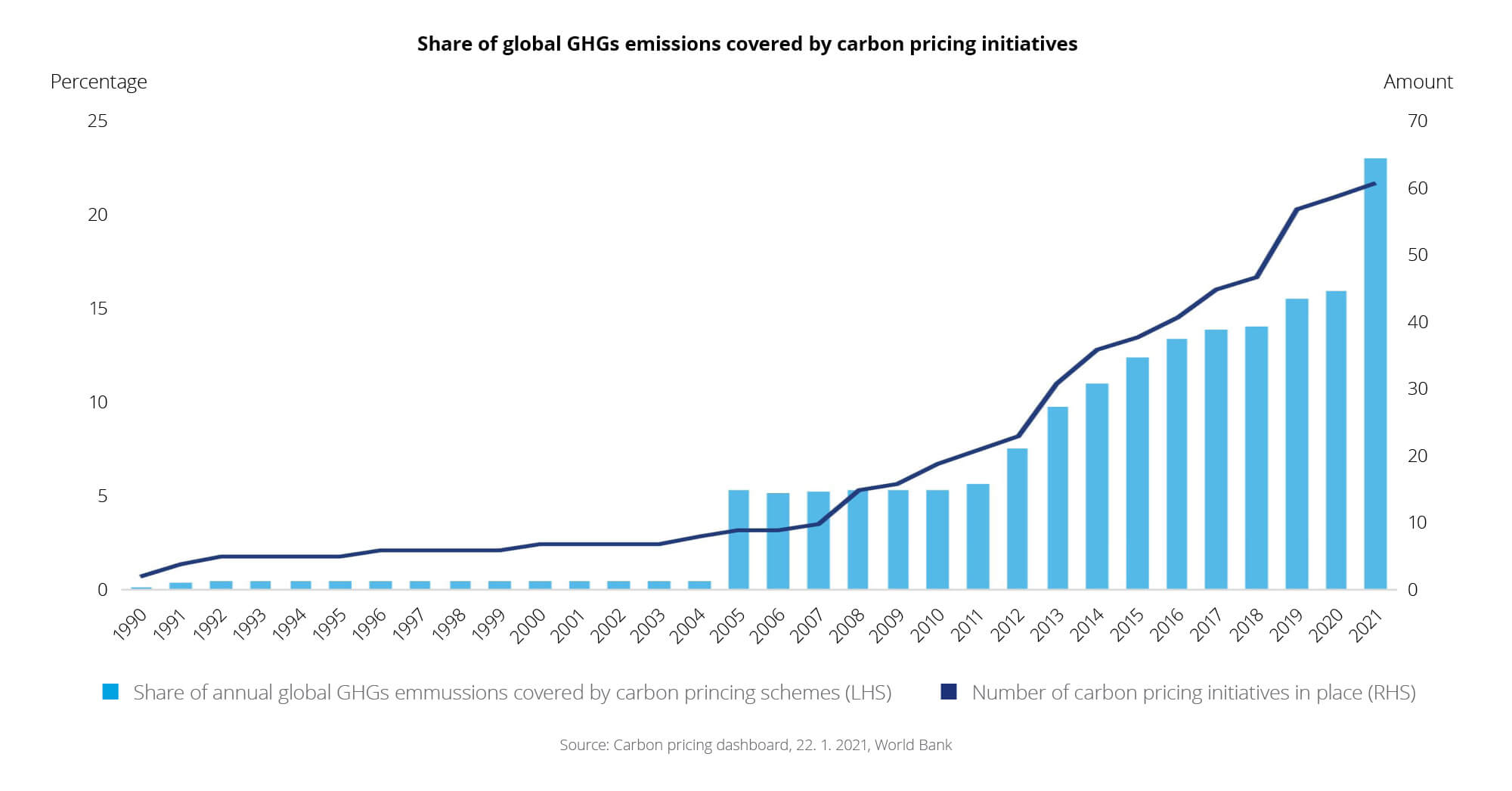 Climate change and the approach of business managers

Deloitte has recently published a summary of the most important information on climate change for business managers that includes a number of interesting findings. According to one study, 40% of millennials would change their relationship with a brand based on the company’s impact on the environment, approximately 45% would change their job depending on their employer’s approach to sustainability. This is in line with another American study, according to which 30% of employees from large companies changed jobs in recent years for this reason.

Therefore, among other things, Deloitte encourages business managers to perceive the green transformation primarily as an opportunity and seek new business models or take the environmental and climate impacts more into account in their business decision-making, not only in relation to their products and customers but also in the workplace (e.g. through remuneration). 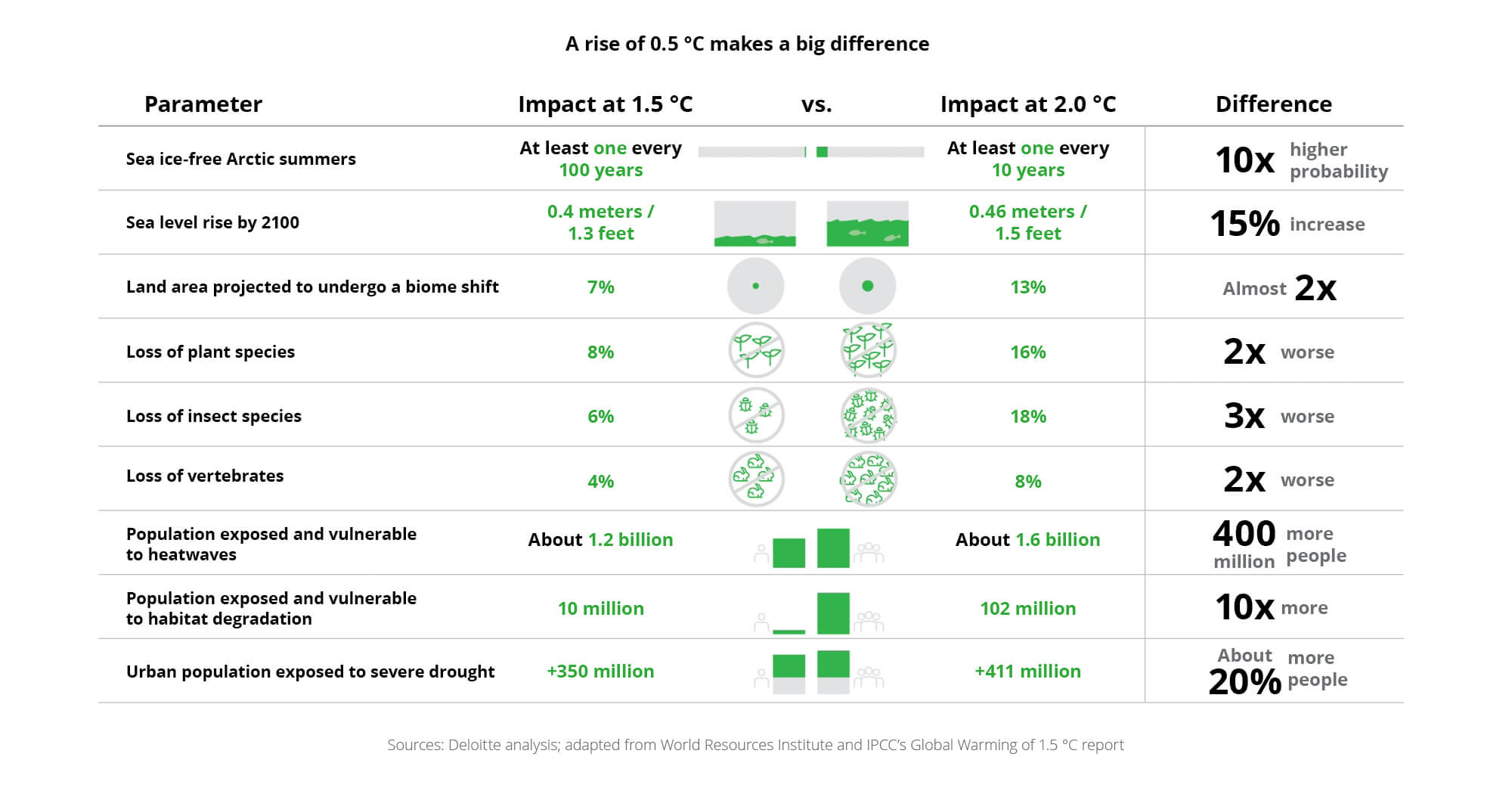 Business leaders are aware of the climate change threat, but the pandemic has hampered the fight

The Deloitte survey among business leaders conducted in February and March 2021 shows that, according to most managers, the fight against climate change is at a tipping point. Many sectors are already experiencing the effects of climate change and associated natural disasters, especially the lack of raw materials and resources.

The efforts of businesses to transform their operation into a more sustainable model have been significantly undermined by the pandemic of COVID-19. Approximately 65% of managers admit that they are forced to cut investments in environmental initiatives. Nevertheless, they remain optimistic and believe that everything should change in the near future as companies plan to accelerate their efforts towards green transformation. Their motivation is not only the strong pressure from governments and legislators but also from the “bottom”, from employees and investors.