The Czech Republic is a country of beekeepers. However, the Czech beekeepers apply a number of approaches that were fit for use in conditions a few decades ago, not today, including the use of chemical products. Jan Rája, a beekeeper, and Romana Linhart, a biologist, decided to change this. They founded the company called Apis Innovation and developed a thermosolar hive with the capacity to eliminate the arch-enemy of honey bees – the invasive Varroa mite – in an eco-friendly way. The result brings chemical-free beekeeping and several other benefits for beekeepers as well as consumers of honey.

“The Czech Republic has the highest number of beekepers per capita in Europe and very likely in the World, too. However, the higher the number of bee colonies in nature, the higher the spread of diseases” says Jana Rája, co-founder and the CEO of Apis Innovation which has been developing the thermosolar hive since 2016. Precisely this hive can eliminate the biggest menace of the honeybee in an eco-friendly way and contribute to environmentally friendly beekeeping.

What was the chief motivation to establish the Company?

Our principal motivation was to develop a hive that would combine the benefits of a thin-walled hive and an insulated hive. We came up with the concept of treating the bees so that problematic chemical medication, pesticides and acids would not have to be used in the hives. It is a hive as well as a treatment device that can fight the Varroa mite using solar energy, which is converted into heat radiation and it thus works completely eco-friendly.

There is no need for chemical medication, it is a healthier option. Chemical residues, often carcinogenic, do not enter the food chain – it is not a concern for the consumer and it does not harm the bees, either. Our hive is used both for treatment and for keeping bees.

How did you come up with such an idea?

It was the idea of my colleague Roman Linhart, we were both passionate beekeepers and we were discussing how come beekeeping was not moving forward and modernising. We wanted to emphasize respect for the bees, to be guided by modern practices and the results of beekeeping research, to promote the sustainability of beekeeping and to move the current, let us say, slightly stale state of the industry. In short, we wanted to keep bees without the need to use problematic chemical medicaments in bee colonies, to clean the honey of their residues, to keep bees naturally and sustainably.

Why was chemistry used in beekeeping in the first place?

Beekeepers spread the honey bee (European honey bee) all over the world as it was the most suitable bee for beekeeping in many ways. When the honey bee reached Southeast Asia, it was attacked by Varroa destructor, a parasitic Asian mite that had coexisted with local honey bees there for millions of years, but the European honey bee had no defence mechanisms against it. The mite arrived in Europe in the 1980s and caused a disaster for the European honey bee population. It eradicated colonies within one or two seasons and completely wiped out wild bees, for example. Chemicals saved the bee population back then, but today it is no longer justified because there are other ways of combating the mite, primarily the heat treatment. However, the mite gradually develops resistance to chemical treatments, so their long-term use is unsustainable.

„Beekeeping has become a trendy thing, and, in general, there will be a significant increase in the number of hobby beekeepers. If beekeeping is to be sustainable, the mindset of beekeepers must change. We believe that our thermosolar hive and other products will make a contribution to this.“

What problems have you encountered in the development of your hive?

In order to try something out, we had to wait for the right time with the prototypes and bees in them –  beekeeping is generally a slower industry due to its connection to nature and the European honey bee season, which starts in early February when the queen starts laying, and ends mostly in October. The honey season is relatively short, usually only in May and June. And we had to fit our proof of concept into the summer period after honey bottling.

The development itself took a number of years, and in 2018 we started mass production. However, there were a number of problems that we had to take into account during the production of the treatment device and the hive. The main one is the fact that beekeepers use different frame measurements, which means we cannot produce only one  hive type. When we sell 100 hives, it does not mean we have sold 100 thermosolar hives of the same design, but it could comprise a different amount of hives of various sizes.

How did it go on?

The development and launch were not as quick as we had expected. But after 2018 we found, this was what we had been striving for, we could start properly, we had the final equipment and this was how we were going to do it. But the major obstacle was funding, lack of advertising abroad and lack of supplies. We were not able to deliver to the beekeepers on time. It did not help that hives are not purchased all year round, but only in the hive season lasting from January to June, so in fact only half a year. These were interrelated problems that we were only able to tackle relatively recently, with the first investment round, which also opened the way for us to expand abroad. We started to do well. But at that time my colleague Roman died suddenly and I started to ask myself whether to continue at all.

Eventually, you decided to go on…

Yes, and it also helped that Roman’s wife, Veronika Linhartová, is a biologist and was part of the project from the beginning and decided to continue. However, we were still facing problems. At the same time, we had to deal with operational issues related to the current economic situation – inflation, unavailability of materials, significantly more expensive materials, which reduced our margin. We also had to figure out how to deliver abroad quickly. It was not an easy time for us.

How did you do with the expansion abroad?

We started with an international crowdfunding campaign that brought us an alternative source of funding. It also brought us our first international customers, most of them from the USA. This presented us with a whole new set of issues – it is not just about logistics, but every beekeeping market is specific in some way, and we had to scale. Our hives are now found in areas from the northern  beekeeping borders in Canada, Scotland and Norway to the southern parts of California, Florida, southern Spain and Sicily. The advantage America has for us is that they use a uniform frame measurement. We are also starting to expand into the German-speaking market.

What makes this market different from others?

Unlike other markets, there are several competing devices that also use heat to eliminate mites, but unlike our solution, these are external devices that need electricity, which of course is usually not available at the sites where hives are located. They are significantly more expensive and labour-intensive devices. The market is also interesting for us because beekeepers already know that heat and thermotherapy can work. The barriers have already been overcome in Germany and we see this market as a great opportunity.

What else are you up to?

We are collaborating with several research institutions, and from next season we will have new products with an extensive market potential that will significantly help bees and beekeepers and that are in line with our vision of sustainable beekeeping. One of them will be a special pollen substitute that will help to solve, for example, the lack of pollen in the summer season or a faster start of the colony to the new season. The composition will be balanced for the bees. The other product might be a natural antiviral.

We are also launching the Bee–to-Business project, which will offer companies bee colonies on their land or on the roofs of buildings.  The bees will be looked after by our experienced beekeepers. The companies will get their own honey, which we can provide in gift packs, we can arrange interesting beekeeping corporate events for business partners or employees and many other activities. But, above all, bees and beekeeping are a beautiful and beneficial activity that is socially positively accepted. We also hope that it can be an impetus for the representatives of the companies involved to think about sustainability and environmental protection from a different perspective.

“The Czech Republic has the highest number of beekepers per capita in Europe and very likely in the World, too. However, the higher the number of bee colonies in nature, the higher the spread of diseases” says Jana Rája, co-founder and the CEO of Apis Innovation, which received the Impact Stars award as part of the Deloitte Technology Fast 50 program for its innovative thermosolar hive. Precisely this hive can eliminate the biggest menace of the honeybee in an eco-friendly way and contribute to environmentally friendly beekeeping. 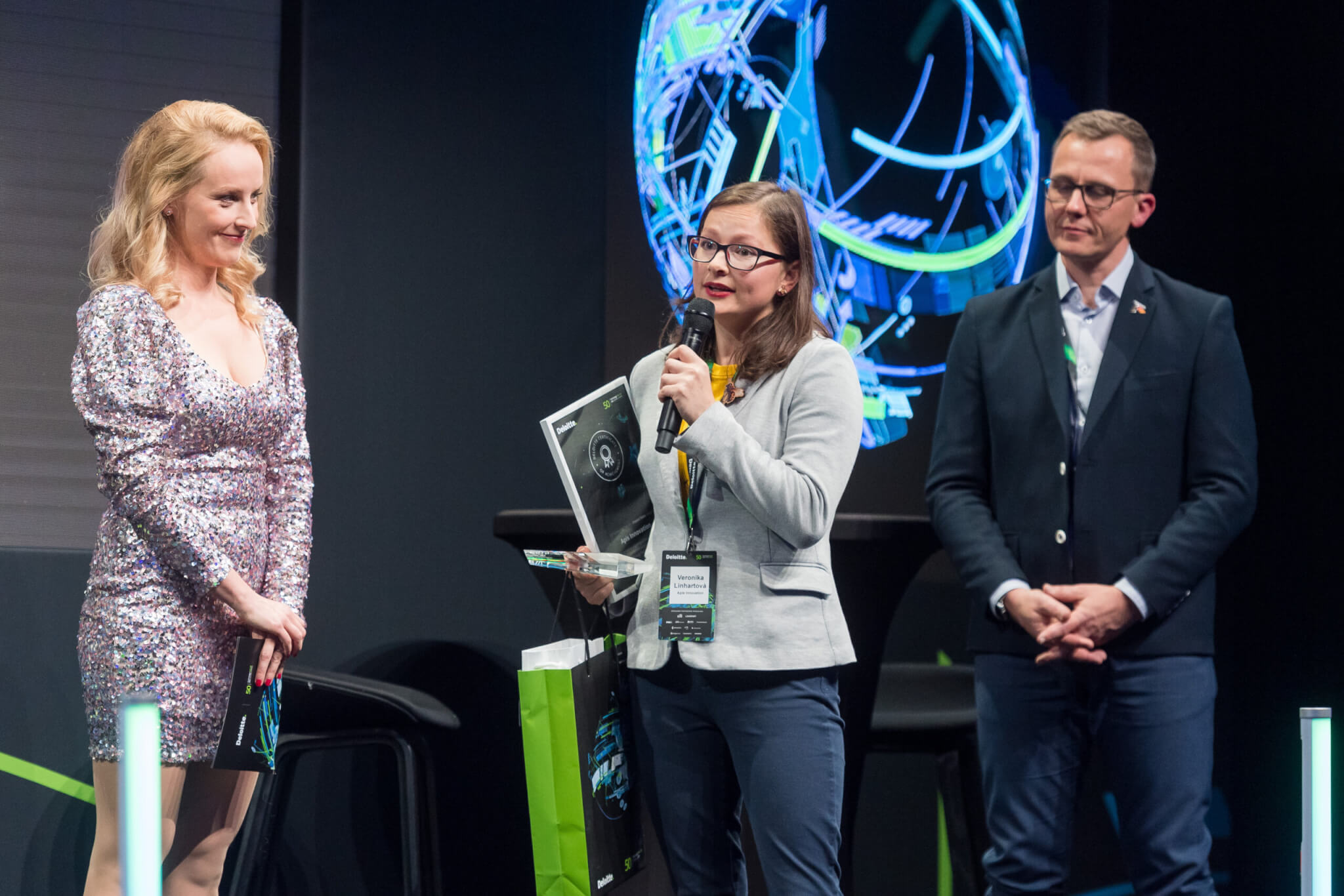 When Otakar Šuffner and Marek Vašíček co-founded FTMO in 2015, a platform that tests and searches for traders on financial markets, a similar project already existed in the world. In hindsight, however, they sp…