Expansion Abroad Through the Lens of Finance: What do Tech Companies Deal With?

The financial foundations of every company are the same. However, in the case of technology companies, the crucial thing is that they have international ambitions from the very beginning. As a result, they grow faster compared to companies from other industries. This trait increases the breadth of their financial services’ requirements. How to deal with different currencies, customers’ payment behaviour or exchange rate risk when the company operates in several foreign markets? Here are some tips from Lukáš Martoš, CE Solutions Sales Head from Citi Commercial Bank.

“Basically, each country the company expands into usually has a different banking system, and this entails the first major challenge for international expansion,” remarks Lukáš Martoš from Citi. “It is not enough to simply say we will open an account in that country. There is a lot more to consider, such as coping with markets with different currencies, exchange rate risks, along with customers’ payment habits may differ market to market and a number of other issues.”

The first challenge is the so-called liquidity fragmentation, i.e. the company keeps cash from customers in different accounts, in different banks and in different currencies. “But the company needs to make payments in the Czech Republic, in Czech currency, or simply pay the supplier in a specific currency. In practice, the company has to log in to dozens of accounts maintained by different banks,” says Martoš, adding that “the time it takes for the cash to arrive in a given account differs in different countries. If you do not bear this in mind, then wages or payments to suppliers may easily be delayed.”

All this can very easily disrupt business relations and the supply chain; in the worst-case scenario, the service supply itself can be interrupted. “If your cloud provider suspends your service, you as a technology company will get into trouble and your business is gone overnight.” 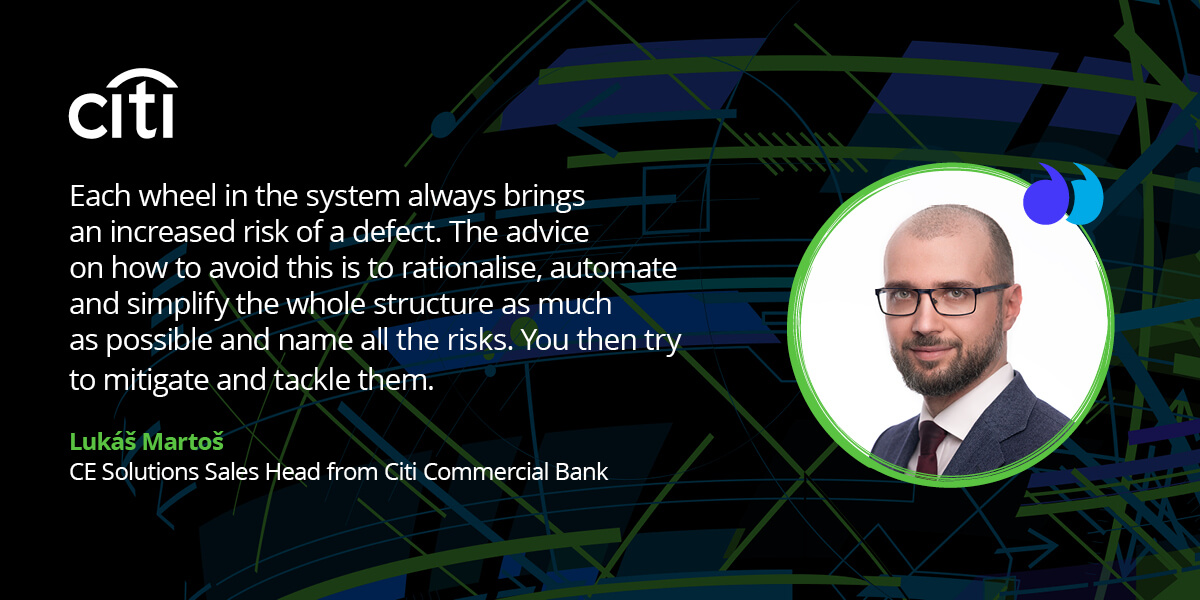 Last but not least, there is the exchange rate risk related to accepting multiple currencies. If the exchange rate changes, the company may lose its profit, or, in the worst-case scenario, it can even operate at a loss. “This then entails various operational risks – due to the fact that the company operates with multiple currencies, it might account for an item incorrectly. But a sum might also be sent in a different currency by mistake; instead of USD, it is sent in CZK. All this costs the company real money.”

Lukáš Martoš follows the motto that perfect things are always those that cannot be further reduced. Translated into the banking world, this means that the larger the company and the more foreign markets it operates in, the more it should simplify its structure and try to have as few bank accounts, or banks, as possible.

“There should be a requirement for one or two platforms that offer clients the option of automating certain processes.  Either through a direct connection to applications, which means that the clients control the banking platform via API and adapt the automation on their side, or using platforms that have built-in processes on the bank’s side. In this respect, Citi offers a real-time cash concentration service at the end of the day. From many accounts worldwide, we can transfer cash to the Czech Republic so that the client can use it for various customer payments.”

Experience from around the world shows that each country or region has different customer payment habits. While bank transfers and card payments are popular in the Czech Republic, the same applies to direct debiting in Germany, while in USA, perhaps somewhat surprisingly, people still often use checks. “Each country has its own specifics and we need to know them. If customers learn that the company does not offer their favourite payment method, they will go elsewhere.”

Local payment methods also undergo development. The two main trends today, in addition to deferred payments (“buy now, pay later”), also include instant payments. “When I started to work in cash management five years ago, the only country supporting instant payments was the United Kingdom. Today, we offer them in 28 countries. Instant payments are still in development, many people perceive them as a way to replace payment cards in combination with banking APIs. But I do not think it will go in this direction. Payment cards bring a lot of benefits, in particular for those who pay with them. Instant payments have potential, but market changes would first have to occur,” concludes Lukáš Martoš.

Pros and cons of deferred payments

“Buy now, pay later” is a very popular payment method in Western Europe. It is already catching on in the Czech Republic, too. It allows customers to defer payment for goods for up to 45 days. This pays off when there is a lack of cash or when the customer is unsure whether they want to return purchased goods within the legal 14-day period. Without the “buy now, pay later” method, they would have to pay for the goods upon receipt. However, from the merchant’s point of view, one of the disadvantages of this payment method is the fact that it is quite expensive with a fee of 3–4%. This can eventually worsen working capital and cash flow, because not only is the payment deferred to the customer, but also often to the company, which can receive the cash up to a few weeks later. Lukáš Martoš points out that this should not be underestimated when expanding to foreign markets. Even if foreign expansion becomes profitable, in practice it may delay your cash flow against the business you have in the Czech Republic or Eastern Europe.

Citi is a partner in the Deloitte Technology Fast 50 CE programme, which annually announces the fastest growing technology companies in the Central European region. See how Czech companies ranked.