How to teach vehicles to communicate with the infrastructure and each other?

A vehicle is driving through a city and, while making a left turn, the driver receives a notification “Attention, crossing with tram”, they stop in time to let the tram pass, as it has the right of way, thus preventing a collision. This is just one practical example of a cooperative intelligent transport system based on V2X communication that notifies drivers about critical situations, thus increasing traffic safety on roads.

A Cooperative Intelligent Transport System (C-ITS) allows for secure and trustworthy communication between vehicles, between vehicles and the transport infrastructure, and with other road users. C-ITS is an innovative and intelligent transport system, and its development holds significant potential to improve traffic safety and flow by effectively utilising traffic data. In the current implementation stage, cooperative systems provide drivers with timely and accurate information about their surroundings. Thanks to C-ITS, vehicles can exchange secure data and information with each other and also with the motorway infrastructure and intersections in real-time. The driver thus receives verified notifications about possible dangers, such as ice, emerging traffic jams, moving motorway maintenance machinery or an incoming vehicle of the emergency services. A communication channel between vehicles and other traffic elements also forms the basis for the development of transport automation.

The European Union supports the development of C-ITS systems through European projects, first in the form of research, then in the form of extensive testing and validating operations, and subsequently as grant opportunities for deployment in production. In part thanks to the fact that the Czech Republic is among the EU member states who joined already the testing stage of C-ITS implementation, it already has the necessary infrastructure for C-ITS deployment. At the same time, companies with the necessary know-how operate on the Czech market.

In its current form, C-ITS can provide standardised C-ITS services. Such services focus on traffic safety and flow by informing road users. The benefits can be illustrated with existing implementations, for example:

An example of the implementation of cooperative systems is the transmission of traffic information and control states to the vehicle. The distribution of information takes place between C-ITS central elements, C-ITS central stations connected to controlling transport centres and selected C-ITS stations on motorways that transmit information to vehicles in advance about changing traffic signs in the section ahead, about current weather forecasts (e.g. threat of ice on the road) or vehicles in oncoming traffic. Drivers can then use this timely information to react to the traffic situation in advance.

Another example of the implementation of cooperative systems is the deployment of C-ITS units in EVs. In the event of an intervention by emergency services, all vehicles in the vicinity receive information about an approaching fire engine, ambulance or police vehicle. Therefore, drivers are prepared to clear the way safely and in time to create enough space for the emergency vehicle to pass through. C-ITS can also communicate with traffic light controllers so that emergency vehicles can use the unit to ensure a preferential passage through the intersection (they have a green light while others have red), thus getting to the place of intervention quicker.

Further development of cooperative systems is tied particularly to the progressive integration of the C-ITS unit with assistance systems and vehicle control systems. Soon, for instance, vehicles will be able to react automatically and in advance to a vehicle braking suddenly in front of them, or they will be able to drive in a convoy of vehicles using automated driving or “platooning”, where braking and acceleration is synchronised across the vehicles in the convoy.

In addition to vehicle-to-vehicle communication, further development focuses on communication with other road users and their protection. Development efforts are aimed at alerting drivers to pedestrians and cyclists in busy intersections or areas with a higher incidence of vulnerable road users, with sensors detecting their movement and transmitting the information to the vehicle to warn the driver in time.

From a technical standpoint, C-ITS comprises several basic elements that form the basis for the whole system: 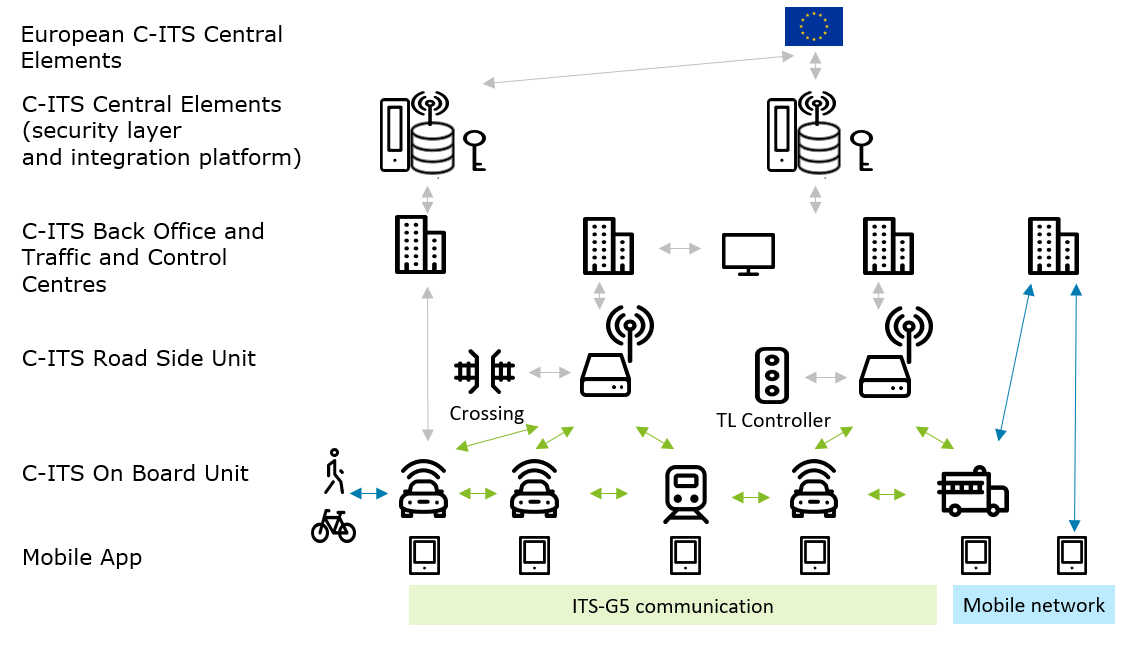 C-ITS is based on communication using both the direct ITS-G5 technology and transmission using mobile networks. ITS-G5 is specified using a European set of protocols based on the IEEE 802.11 standard and its 802.11p extension and operates on the 5-9 GHz frequency reserved exclusively for transport services. The ITS-G5 technology allows for direct transmission between vehicles and the infrastructure. It is sometimes called “the Wi-Fi for cars”, and its main advantage is its transmission speed. Mobile data networks are primarily used for transmissions via a central C-ITS station which generates traffic information. The technology is 5G-ready.

Further development is critical to reap the benefits of C-ITS in full. Development is needed on both the transport infrastructure side and on the side of equipping vehicles with C-ITS stations. C-ITS development is one the supported endeavours at both the European and national levels. To expedite C-ITS deployment to road networks, railways and in cities, subsidies are available for investors to take advantage of.

There is development also in terms of equipping vehicles. There are also subsidy programmes available for vehicles belonging to entities within the public sector (such as the vehicles of transport companies). Certain vehicle manufacturers already offer new series with C-ITS as part of the basic equipment. Cooperative systems are included in the concept of EuroNCAP as well. The roadmap for the development of the vehicle safety rating takes into account the C-ITS functionality from 2024 onwards, i.e., after 2024, only vehicles equipped with the cooperative system may be rated with the full safety score.

The usual motivation for automation is to save operating costs and reduce the portion of human labour. However, other factors - and risks in particular - are increasingly reflected in the return on automation i…

DORA: Regulation on digital operational resilience and its impacts on financial entities

Regulation in the area of information and communication technology is to be unified into a single legislative act. The European Commission is preparing a set of measures including a Regulation on digital operat…

Work from anywhere as a trend of the near future. How is the virtualisation of organisations going to impact the work content?

By enabling employees to work from their homes during the pandemic, a number of companies were able to maintain their operation continuity. At the same time, the work-from-home model appeared to suit many emplo…