Support for research and development in the Czech Republic: opportunities as well as risks

From 2021 to 2027, Czech companies will have a record amount of public funds available to support their development activities. Most funds will be primarily released to support the so-called green projects within the implementation of the Green Deal strategy and to support research and development.

Research, development, and innovation represent an essential means to achieve economic growth and increase the productivity of economies. It turns out that the more advanced the country’s economy, the more important the research, development, and added value arising from them are. It is no coincidence that successful economies such as South Korea, Japan, the USA, Germany, and the Scandinavian countries are also the top scorers in research and development (R&D) intensity indicators. 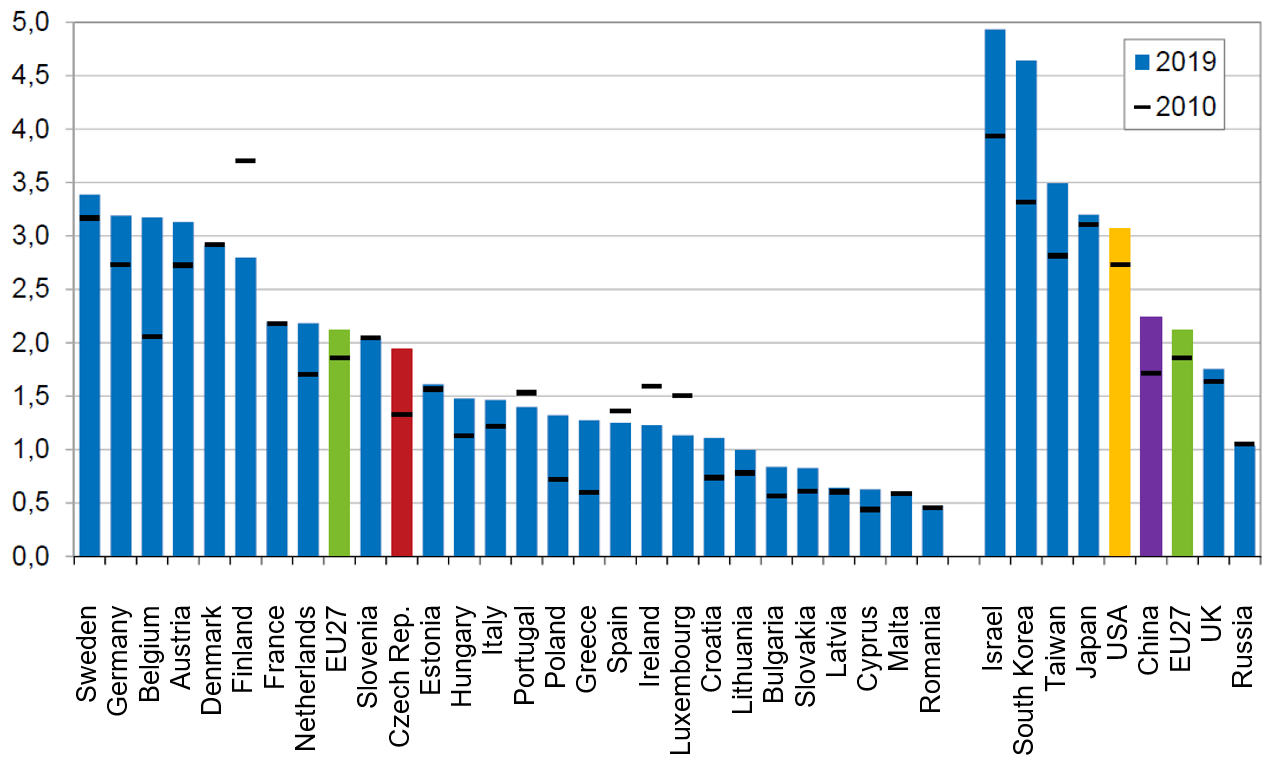 In the Czech Republic, we also realise the importance of R&D investments for the country’s overall economic situation. Over the last ten years, the R&D expenditure in the Czech Republic has more than doubled. In 2020, the expenditure slightly exceeded the existing record of 2019 and reached more than CZK 113 billion. In relation to the GDP, it exceeded 2% for the first time.

Although this is less than the 3% target announced in the government’s statements, it is already comparable to the EU27 average. Almost 2/3 of these R&D expenditures in the Czech Republic are spent in private companies; the remaining 1/3 is used by government entities – particularly universities and the Czech Academy of Sciences. Not surprisingly, information and communication technologies represented the fastest growing sector in terms of research and development.

Research and development of new products, processes or services is a certain kind of technical and economic risk for private companies, as the funds invested in R&D may not pay off. Reducing this risk and motivating to increase the R&D intensity are the objectives of financial support from public funds, which is in a form present in the economic environment of the vast majority of countries.

The portion of this support makes up approximately 12% of the companies’ R&D expenditure in the Czech Republic. This aid intensity varies significantly even across developed countries, from approx. 3.3% in Denmark, 10.4% in the USA, to more than 25% in France, the United Kingdom or Italy. From the companies’ perspective, however, the crucial element does not include only the volume of support, but also the availability, stability, and transparency of its conditions, as the latest survey conducted by Deloitte in the entire Central European region showed.

R&D Support from Public Funds in the Czech Republic

Within the direct support, financial subsidies are provided directly to beneficiaries, i.e. businesses or other entities (universities, the Academy of Sciences, etc.). Subsidies are available from both national and European resources. In the case of national resources (Czech government budget), within the support of business entities, these primarily include programmes under the auspices of the Ministry of Industry and Trade of the Czech Republic (MIT) or the Technology Agency of the Czech Republic (TA CR). Funds from the European resources can be further divided into funds, which are further redistributed by the government through individual ministries within operational programmes, e.g. the Operational Programme Enterprise and Innovations for Competitiveness (OPEIC) or its successor Operational Programme Technologies and Application for Competitiveness (OPTAC) under the auspices of the Ministry of Industry and Trade, and to funds distributed directly by the EU in Brussels, e.g. HORIZON EUROPE programmes.

The indirect support includes investment incentives and an R&D tax relief (hereinafter referred to as “R&D tax relief”). This allows companies to reduce the tax base by selected expenses incurred in the implementation of R&D activities, which ultimately represents a saving of 19% (current corporate income tax rate) on such expenses. The advantage of the R&D tax relief also lies in its possible application during the next up to three years in the case of an insufficiently large tax base. The relief can include 100%, or in the case of a year-on-year increase of up to 110%, of expenditure spent on research or development projects (pursuant to Act No. 586/1992 Coll., on income taxes).

Investment incentives then represent another opportunity to obtain investment support for tangible or intangible fixed assets. In the case of R&D support, we are talking about investment incentives aimed at supporting so-called technology centres, in the case of which the support might be focused on both the establishment and expansion of development capacities (expansion of existing production capacities will be supported only in the case of small and medium-sized enterprises, and only in some regions in the case of large enterprises). The amount of support then varies according to the regional map of support, which will undergo further changes from 1 January 2022, not only in terms of the division of regions, but particularly in terms of the amount of support provided in individual regions.

Each of these forms of support has its own specifics and it is in general not always possible to recommend only one of them for a certain type of project. It is always necessary to consider the individual advantages and disadvantages, for each project and company. Aspects to consider that also affect the amount of support include in particular the following:

Consideration of these aspects should always occur before the company decides to receive any kind of the described support, or even combine them. It is necessary to assess both the advantages and disadvantages, as well as the risks and benefits of each type of support. Orientation in the conditions for obtaining support is complex, and many applicants, therefore, use the services of advisors specialising in individual areas, who can advise on how to select the appropriate support and how to obtain it, and who can help with the project implementation. 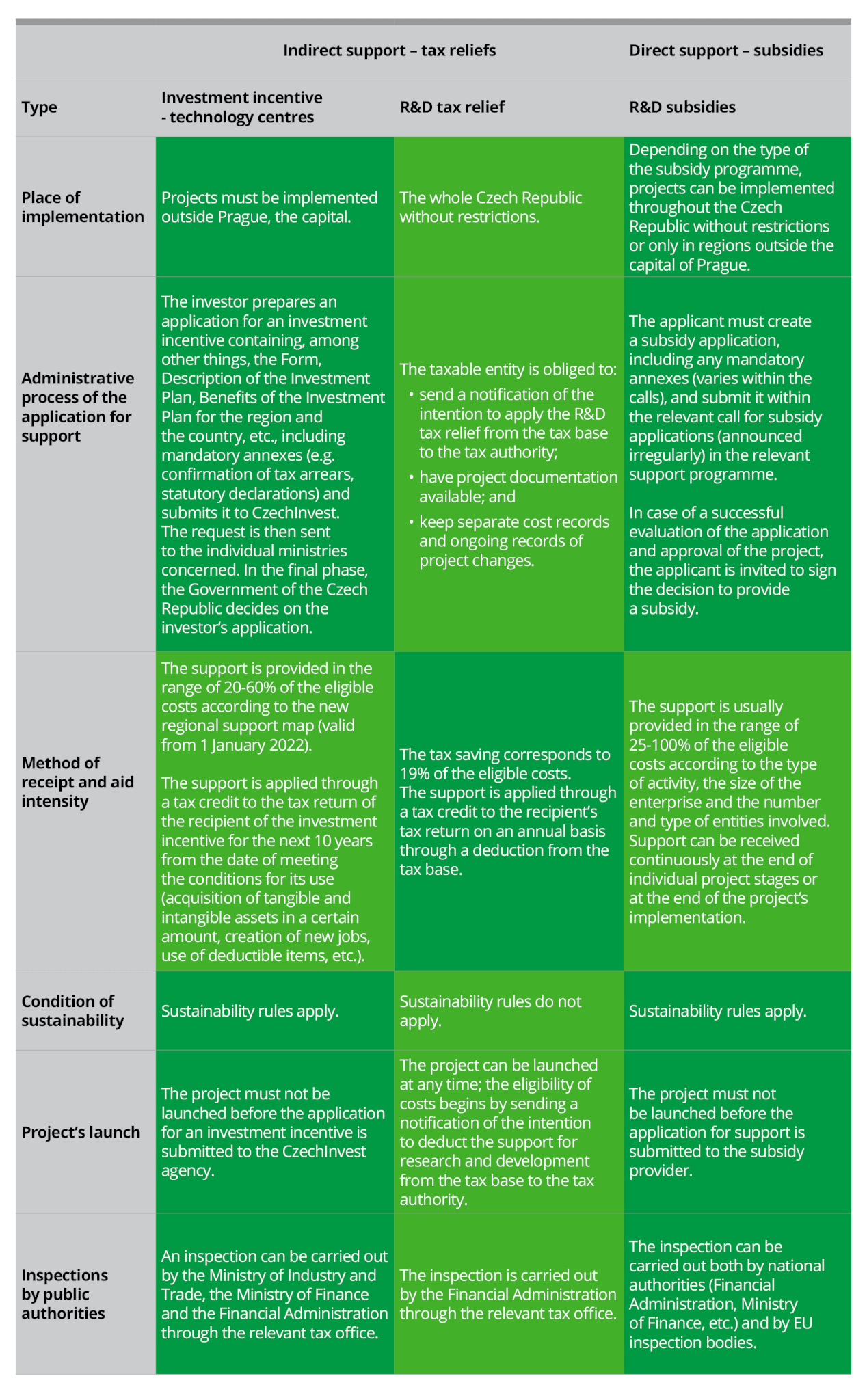 The article was published on November 25, 2021 on the Ekonom.cz website.

Schengen visas going online: will digitalisation of the process make our lives easier?

At the end of April 2022, the European Commission announced an ambitious plan to digitalise the process of Schengen visa applications. The main change consists in the fact that the entire application process, t…

The latest update of the list of tariff suspensions and quotas entered into force on 1 July 2022. Their purpose is to allow companies in the EU to import raw materials, semi-finished products, parts and possibl…

On 21 June 2022, the tax administration issued the Completion of frequent questions and replies including practical examples in relation to the reporting obligation regarding reportable cross-border arrangement…