How to manage foreign exchange gains or losses

The ambiguous treatment of foreign exchange revaluation in Czech legislation is one of the reasons why we encounter in practice a number of errors arising from incorrectly set accounting procedures. Evidence of the complexity of foreign currency issues is also provided by several Interpretations of the National Accounting Council, which focus on the translation of selected items of assets and liabilities into Czech currency. This article focuses on the basic rules of revaluation of foreign currency transactions and balances, with a note on some specifics of this area of accounting.

Foreign exchange revaluation – the what, how, and when

Nowadays, there is hardly any entity that did not realise and recognise a transaction in a foreign currency during a financial year. According to the Accounting Act and Decree No. 500/2002, reporting entities are obliged to keep their accounts in monetary units of Czech currency. Transactions in any other currency must therefore be treated as “foreign currency” and the impact of exchange rate movements between the date of initial recording of the transaction and the time of settlement must be recognised in foreign exchange gains or losses. Although Czech regulations permit various methods of using foreign exchange rates to record transactions, including a fixed rate for the entire reporting period, the most common method in practice is to use a daily or fixed monthly rate.

At the balance sheet date, selected items of assets and liabilities must be revalued in accordance with Section 4(12) of the Accounting Act at the exchange rate promulgated by the Czech National Bank if the related transaction is in a foreign currency.

Which assets and liabilities should be translated into Czech currency?

Within the context of international accounting standards, entities should revalue all assets and liabilities that represent a future cash flow in a foreign currency. Unfortunately, the Czech regulations do not explicitly contain such a rule, and therefore in practice, there are disagreements about which items to translate at the end of the reporting period and which not to. It is important to note that such a decision has an impact not only on the profit or loss, but also on the tax base and tax liability. It could also have an indirect impact on the valuation of assets.

Some support in this area is provided by the Interpretations of the National Accounting Board (NAB) dealing with foreign exchange revaluation of items for which the application of translation is not always straightforward. Generally speaking, the approach to the revaluation of foreign currency balances under the Interpretations is consistent with that of internationally accepted accounting principles, namely IFRS. For entities that, among other things, report results to their parent companies under IFRS (reporting packages), the principles contained in the Interpretations may help reduce the number of discrepancies with Czech accounting standards.

These NAB Interpretations primarily include:

These Interpretations express the expert opinion of the National Accounting Board on the practical application of Czech accounting principles and thus contribute to the formulation of optimal and uniform practices in the field of financial reporting. Although the Interpretations are not legally binding, the Supreme Administrative Court has adopted them several times as a source for its judgments. These include, for example, Judgment No. 7 Afs 365/2018-62, which relies on Interpretation I-5 on costs associated with the acquisition of fixed assets, or Judgment No. 4 Afs 170/2021-35, dealing specifically with foreign exchange revaluation of prepayments, where Interpretation I-43 is cited. Therefore, if an entity follows the applicable Czech legislation and the recommendations of the National Accounting Board, its approach to the revaluation of assets and liabilities ought to be akin to the summary provided in the following tables. 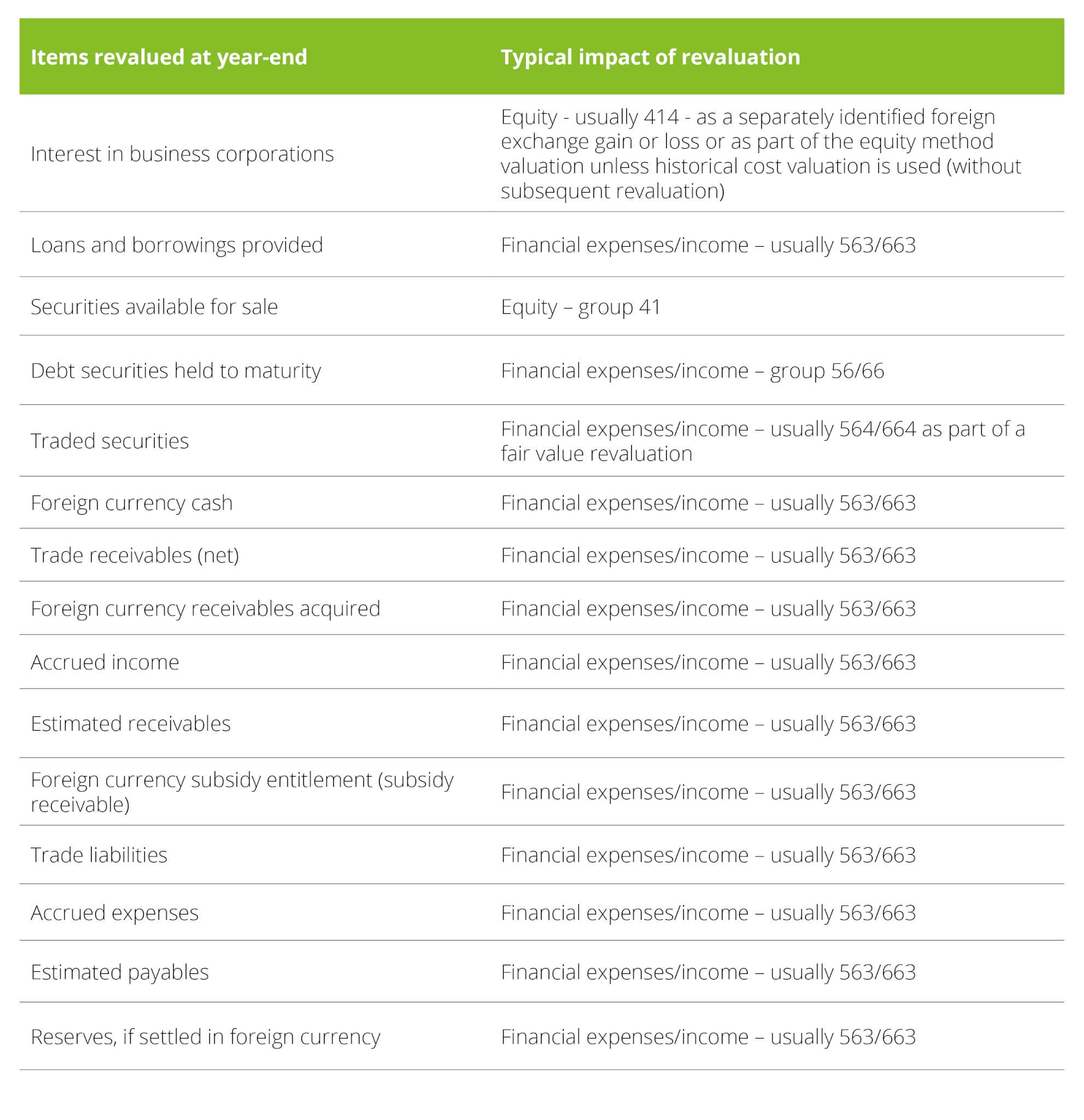 Special attention should be paid to setting up the company’s accounting policies and implementing the chosen procedures in the accounting software. This is because the software historically lacks the setting for this foreign currency translation philosophy.

Let us take a long-discussed topic in practice – the revaluation of a receivable with a provision already created – where Interpretation I-42 says that only the difference between the nominal value of the receivable and the provision, i.e. the net value, should be revalued. This is not easy to reflect if the entity has a large number of receivables involved, from different reporting periods, with varying recoverability, etc. The Interpretation thus also provides a simplifying compromise solution. This makes it all the more crucial for the procedure to be described in accounting policies, implemented in the accounting software, and disclosed in the notes to the financial statements.

The revaluation of foreign currency reserves, in contrast, creates a risk that foreign exchange gains or losses will be incorrectly included in the tax base as a tax-deductible expense. However, the costs associated with reserves that are not established under specific legislation cannot be considered tax allowable. The revaluation of such reserves must therefore be kept in separate analytical accounts through proper implementation in the system.

It is also important to decide correctly whether the foreign exchange revaluation will affect the profit or loss for the reporting period or the equity items – account class 41. In particular, revaluation of equity interests and available-for-sale securities should be charged against equity, while most other transactions have an impact on profit and loss accounts 563 and 663.

Another frequent problem is the unjustified overstatement of expense and income turnovers in foreign exchange revaluation accounts. This is usually caused by the monthly revaluation of foreign currency items and poor accounting software settings which, for example, post a monthly revaluation without reversing the previous one, thereby overstating turnover in the 563/663 accounts.

As implied in the paragraphs above, the revaluation of foreign currency assets and liabilities is not always a straightforward operation and needs to be set up correctly within the accounting policies and implemented in the accounting software accordingly.

Finally, an entity must also deal with the potential risk that a tax administrator will challenge the practices supported by the NAB Interpretations, particularly if they result in annual methodological changes. There are certainly further developments and technical discussions to arise in this context. The new accounting legislation prepared by the Ministry of Finance of the Czech Republic, which is expected to come into force in 2024, could promise to clarify the situation.

The European Financial Reporting Advisory Group (EFRAG) updated its report showing the status of endorsement of each IFRS, including standards, interpretations, and amendments, most recently on 22 December 2022…

Closing out 2022 in IFRS financial statements

This article provides a high-level overview of the new and revised Standards and Interpretations that are effective for the December 2022 calendar year-end and subsequent accounting periods.

With the end of the financial year, many companies are faced with the need to recognise unpaid management or employee bonuses in their accounts. Each year we see different views on how to handle this in the fin…