Real property tax is determined on the basis of data recorded in the land registry; however, in case of discrepancy between the data and the actual state of affairs, the current practice gives preference to the actual state of affairs. Although the related case law has long preferred this approach, the tax administrator has not always accepted it. The proposed amendment to the Real Property Tax Act should bring a significant shift in this matter. How can it affect specific tax liability?

According to the proposed amendment to the Real Property Tax Act, a new paragraph should be incorporated into the existing text in 2021 that would explicitly state that for real property tax purposes, the deciding factor is the type of land recorded in the land registry, regardless of whether it corresponds to the actual state of affairs. Only in the case when the land registry does not specify the type of land in question, the actual state of affairs is the deciding factor for real property tax purposes.

According to the explanatory report, the purpose of the amendment is to remove legal uncertainty and at the same time increase the significance of information recorded in the land registry, because the Land Registry Act also imposes an obligation on owners to notify the land registry of potential changes regarding their real property. Whether the amendment will lead to a decreased or increased tax liability will always depend on the specific situation of the taxpayer. We present the specific impacts of the amendment on the following model example. 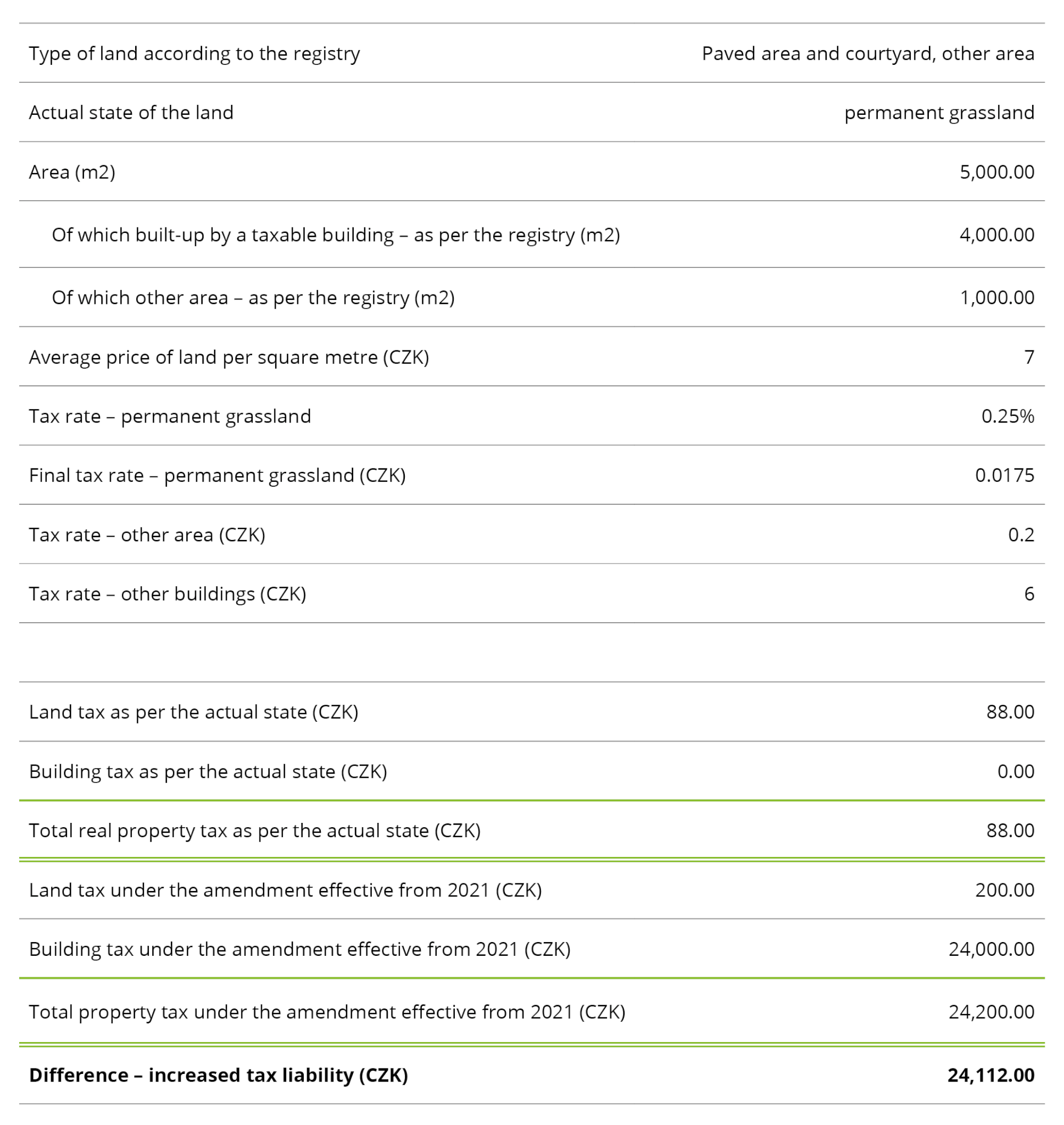 For the sake of completeness, please note that the amendment only focuses on the type of land; it does not provide for the definition of the type of building in a similar way. This can bring even more uncertainty into the matter, for example in a situation when the taxpayer has a building on the land that is not recorded in the land registry. According to the wording of the Real Property Tax Act, the taxpayer would then tax the land according to the information in the land registry, i.e. the full area without exempting the area built-up by a taxable building.

The government presented this proposed amendment to the Real Estate Tax Act to the Chamber of Deputies in Parliamentary Document No. 910. As the proposed amendment is now in for a second reading, its wording is not final and it remains to be seen whether it will be approved in its current form or whether the uncertainties mentioned above will be dealt with by amendments. We will inform you about any news regarding this amendment; however, we can already recommend that you review the information on your property in the land registry and make sure that all information is up to date and corresponds with the actual state of affairs.

As we have already informed you, starting next year, the upcoming legislation will impose a new reporting obligation on the operators of digital platforms; they will be required to disclose information to the t…

Schengen visas going online: will digitalisation of the process make our lives easier?

At the end of April 2022, the European Commission announced an ambitious plan to digitalise the process of Schengen visa applications. The main change consists in the fact that the entire application process, t…

The latest update of the list of tariff suspensions and quotas entered into force on 1 July 2022. Their purpose is to allow companies in the EU to import raw materials, semi-finished products, parts and possibl…